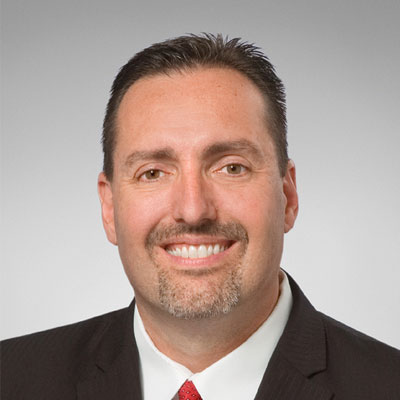 Bill Voloch is the president and chief executive officer at Wesley Medical Center. He is an innovative leader with more than 14 years of experience in hospital management.

Prior to joining Wesley, Voloch served as the chief financial officer at the Medical Center of Aurora in Colorado. He began his career with HCA in 1993 at Michael Reese Medical Center in Chicago.

Voloch graduated from Indiana University with a Bachelor of Science degree in accounting, and he and received his Master of Business Administration degree from Regis University.

Voloch has volunteered with the Rotary Club, as a Cub Scout den leader and with the Multiple Sclerosis Society.

He and his wife, Juli, have three sons and two daughters. 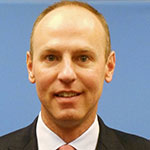 Lowell Ebersole is the chief medical officer
for Wesley Healthcare.

He graduated from Bethel College in Newton, Kansas, with a bachelor’s degree in chemistry. He received his doctor of osteopathy from Des Moines University in Des Moines, Iowa.

He and his wife, Patresa, have four children. 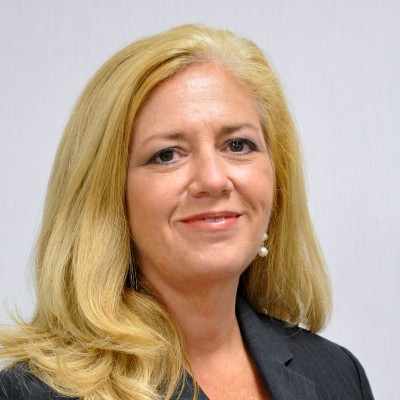 Jane Ritter is the chief nursing officer for Wesley Healthcare. She brings more than 18 years of experience in nursing leadership to her role, having most recently served as vice president of Patient Care Services and chief nursing officer at United Regional Health Care System in Wichita Falls, Texas.

Ritter and her husband, Karl, have two children. She enjoys spending time with her daughter, an attorney in Albuquerque, New Mexico, supporting her son’s school activities, and walking their Australian Shepherd, Oso. 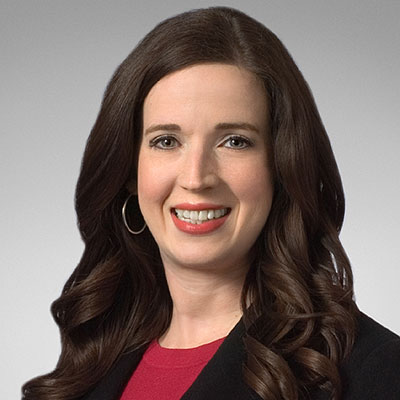 Nicole Castleberry is the chief financial officer for Wesley Healthcare.

Castleberry comes to Wesley after serving as the chief financial officer at HCA’s Lakeview Regional Medical Center in Covington, Louisiana. HCA is Wesley’s parent company. At the 167-bed Lakeview facility, Nicole was responsible for all financial areas including accounting, supply chain, medical records, revenue management, case management and patient access. She also has served as a vice president and controller/market director for finance at Parkridge Health System, and as an accounting manager and senior accountant at Life Care Centers of America, both in Tennessee.

Castleberry graduated from the University of Tennessee with a bachelor’s degree in finance and a master’s degree in business administration.

She and her husband, Chad, have two daughters. 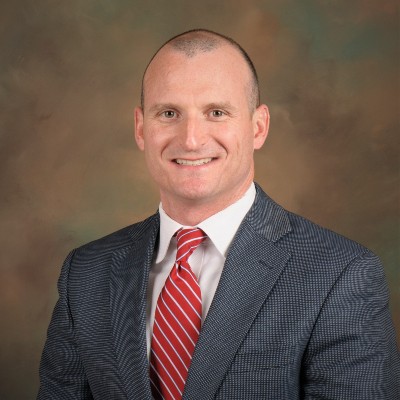 J. Kolbe Sheridan is chief operating officer (COO) for Wesley Healthcare. He returned to Wesley in 2020 after having served as an Administrative Resident and Fellow, then as Chief Staffing Officer and Night Administrator, at Wesley from 2011-2013. In the interim, he served as assistant chief executive officer (CEO) at Heartland Regional Medical Center, Marion, Ill., and COO at both Affinity Medical Center in Massilon, Ohio, and Gateway Regional Medical Center in Granite City, Ill. Most recently, Sheridan served as CEO at Barstow Community Hospital, Barstow, Calif.

Sheridan is an avid skier, runner, golfer and mountain biker, and enjoys college and professional sports. He and his wife, Tobi, have an English Bulldog, "Zeelo", and a Great Dane, "Zuzu".

Lisa Clark is Vice President of Human Resources, joining Wesley Healthcare with more than 25 years of experience in Human Resources. Twenty of those years were spent in the healthcare and mental health services industries – most recently as Human Resources Director at Willamette Valley Medical Center, an acute care hospital in McMinnville, Oregon.

Clark thrives on helping colleagues through difficult work and life issues and building strong teams that create solutions for today’s healthcare challenges. In her free time, she enjoys camping, hiking, boating, dirt biking, skiing and visiting the family’s ranch. She and her husband, Scott, have two sons. 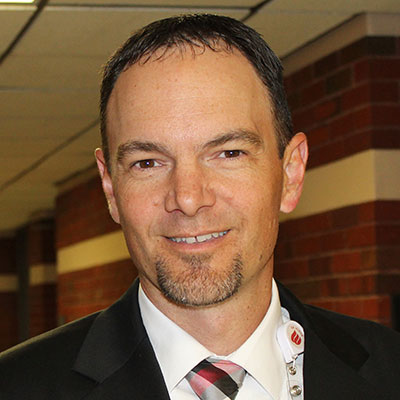 Jeremy Pauly is the associate administrator of Wesley Medical Center.

Jeremy and his wife, Lacy, have a son.

Barker and his wife, Cheryl, have a daughter and two sons, and he enjoys traveling, hunting, cooking and church activities outside the office. 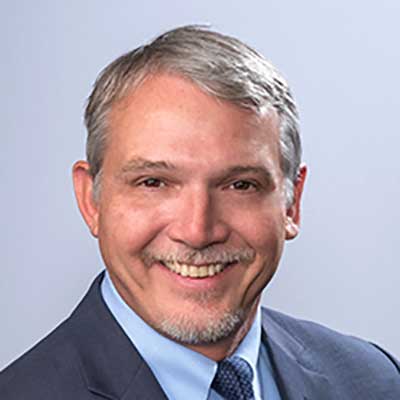 Swallow graduated from Butler County Community College with an associate degree of nursing, and he received his bachelor’s degree in nursing and his master’s degree in business administration from Southwestern College.

Brian and his wife, Denise, have three children and five grandchildren. 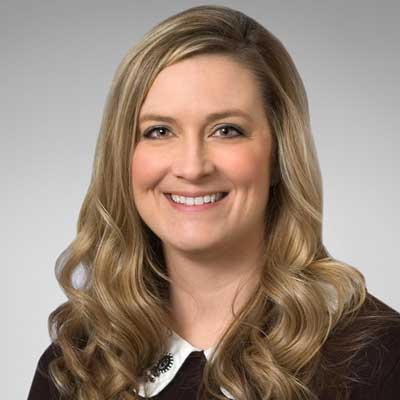 Williams graduated from Midwestern State University with a bachelor’s and master’s degree in business administration.

Williams has previously served as a member of Hope’s Door Financial Council and Hughston Elementary PTA, as well as coached an Upward youth basketball team.

She and her husband, Kent, have two sons. 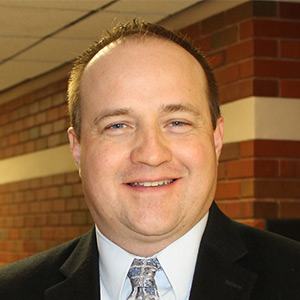 James Stepien is the vice president of business development for Wesley Healthcare and works collaboratively across the Wichita market to lead and develop business strategies for services, facilities and operations at Wesley.

Stepien previously served as one of Wesley’s physicians relations and outreach managers, where he was instrumental in signing more than 50 rural Kansas hospitals to affiliation agreements providing partnership opportunities to Wesley Healthcare.

Stepien graduated from Friends University with a bachelor’s degree in business administration and a master’s degree in healthcare leadership.

He and his wife, Tiffany, have one daughter. 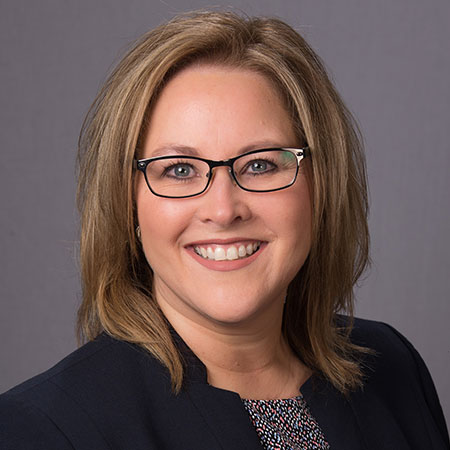 Sandy Schremmer is the vice president of quality and infection prevention for Wesley Healthcare.

Schremmer began her nursing career at Wesley as a nurse tech in Wesley’s Post-Anesthesia Care Unit (PACU), later worked in Wesley’s Cardiac Intensive Care Unit (CICU), and served as a manager of Wesley’s Ambulatory Surgery Unit (ASU) and Pre-Op clinic. Schremmer than joined Via Christi hospitals serving in a variety of clinical roles from a manager of the medical-surgical and intensive care unit to director of patient safety and quality. She most recently served as a senior consultant and clinical performance partner at Premier, a healthcare management-consulting firm.

Schremmer graduated from Butler Community College in El Dorado, Kansas, with an associate’s degree in nursing and received a bachelor of science in health information management from the University of Kansas in Lawrence. She earned her master’s of business degree in health care leadership from Capella University in Minneapolis, Minnesota. Schremmer is certified in professional health care quality and is a Lean Six Sigma Greenbelt.

She and her husband, Doug, have an adult son and daughter.